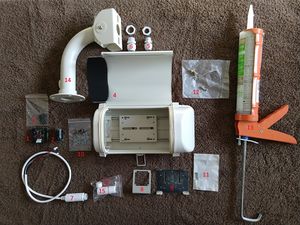 Very precise timing is essential to processing the meteor data, so unless you are confident in your internet connection an RTC module ensures the Raspberry Pi always has the precise time, even when power or internet is unreliable. AliExpress sells a pack of 10 but they are inexpensive - maybe share the extras among other camera constructors in your area. The AliExpress store lists two RTC modules, one labelled "DS3231 module" and the other "mini DS3231 module." Select the "mini DS3231 module" option; it is designed for the Raspberry Pi. It has 5 pins and includes a battery.